Our lives were busy, hectic, always on the go but fun and full of laughter. Laura was always busy with schoolwork, after school clubs, and always out with her mates climbing trees and swimming at the local rec centre. We tried to get out in my old camper as much as possible for days out and she was no happier than outside getting scruffy. 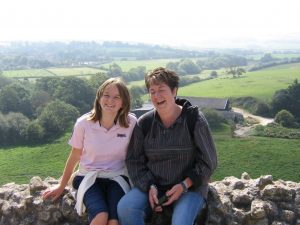 Then, in the summer of 2009, 3 months before Laura’s 16th birthday, she went down with a virus which affected her internal organs and made her extremely ill. Over the summer holidays that year she began to pick up a bit, so I thought her body just needed time.

Laura returned to school in the September, though still exhausted and achy so the paediatrician sent her for more tests.  In the October of that year, she was diagnosed with Post Viral Fatigue Syndrome and Chronic Fatigue Syndrome. We had no idea about either of those diagnosis and nobody gave us any information, we were just told to wait to see the paediatrician who specialised in this area. So, we kept on battling and pushing Laura way beyond her limits! By Christmas of that year, she was on a reduced timetable for her last year of school, picking the most important lessons to attend, and sometimes using a wheelchair that my dad got from his volunteering job. At the time I was working 7am-2pm as head cook in a school kitchen about 5 minutes away from home so I was able to get home if she needed me. I still believed she would get back to her old bouncing off the walls self, little did I know our lives were never going to be the same.

In June 2010, after a year of feeling poorly every single day, Laura was officially diagnosed with M.E. When Laura was first seen by the paediatrician, we were told she would recover within the year, that most children do. She was young, you listen to the Doctors and the Medical specialists because they know best, but I don’t believe they understood M.E at all, they were clutching at straws just like everyone else. I would get so angry at the hospital because they couldn’t make her better. I was angry and frustrated at myself that I couldn’t do anything to help her, because as a parent you nurse your children back to health after an illness then move on to what comes next in their lives. 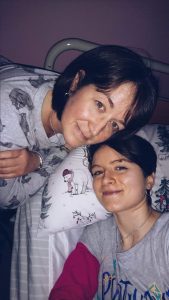 In the next 3 years Laura’s health gradually declined. She could no longer access college, so could no longer access University, and with it all her dreams of becoming a criminal psychologist vanished which was hard but she took it in her stride. But to watch your child’s dreams crushed is heart-breaking. Knowing there is nothing you can do, except to keep going. By the start of 2013 she was bedbound and unable to walk. We soon got fed up with the “think positive” “It’ll get better” “you’re looking well”, and no-one listening to us.

In 2015, after Laura and her ex split up, then Laura’s health deteriorated even more with a gall bladder infection, it became even harder. I had to work so we contacted Social Services to ask for help. We were lucky to be assigned an amazing occupational therapist who was like an angel from above and the first person to listen to what she needed. We had a hoist fitted, a stairlift put in, and they adapted my bathroom to become a wet room. Before this I was manually lifting Laura onto a commode in her bedroom, she couldn’t access downstairs even if she had felt well enough to and she hadn’t had a shower in years as it was not accessible to her. But, even after all of this, Laura was too unwell to access any of it. 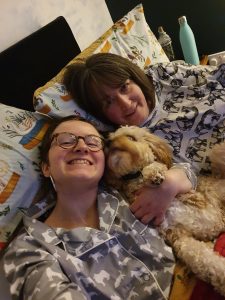 A social worker came and did an assessment on her care needs and said Laura could have company provided care 30 minutes in the morning and 30 minutes at lunchtime. I think my daughter still has PTSD from this time. By then I had changed jobs to be a skills trainer for school kitchen staff and worked 8am to 4pm, sometimes later if courses ran over or there was traffic. I would go off to work in the morning dreading what would happen, almost every day I would have a phone call from Laura because the carers hadn’t turned up or had been unhygienic, had not washed their hands, were not following protocol. These were the people I was relying on to take care of my daughter when I couldn’t, but I ended up doing most of it when I got home from work as I told Laura if she didn’t feel safe then I would do it. When we told the social worker about our experience, we were told it was just the way it was.

In the spring Covid lockdown in 2020 Laura’s health improved a little. We didn’t have to have carers and I was home on furlough so had time with her. She taught herself to walk and was able to come sit with me downstairs a couple times a week, every few months we could go for a drive in the car. We dared to believe things would be different. At the end of that year we made the decision to move county to be closer to family. We downsized to a more manageable house for me and so we could make sure the house was as accessible as possible. But, 6 months after moving in Laura has relapsed. She can’t access anything we put in place and it’s had a massive impact on us. We’re surrounded by beautiful countryside but I can’t enjoy it with my daughter. I now work from home as much as possible so I care for Laura alongside working full time but it’s hard for the both of us. 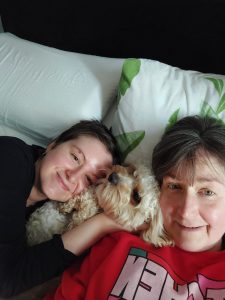 I went through a stage at Laura’s most severe where I’d get overwhelmed and my pressure valve would blow over the slightest thing in what Laura called going “Hulk Smash”. I was trying to cope by just ploughing forward. I would try to plan things in my head of where we could go and what we could do when Laura got better, only to have all the plans crushed as the time passed and Laura didn’t improve.

When I became a mum, I made that choice to be a mum for the rest of my life, it doesn’t matter how old your children are they are still your children. My daughter tells me all the time she’s an adult, and she is. Laura’s a remarkable young woman with her own [big] ideas and feelings, but she will always be my little girl. It breaks my heart every time she’s asked the same questions over and over by the same medical professionals, only to be told she needs antidepressants or physio. As if those things are a magical cure for M.E. I have to put my battle armour on to fight medical professionals for my daughter to be heard and it is exhausting.

I manage my “Hulk Smash” moments now because I don’t make plans anymore. We don’t go on holidays or days out. We go day by day because we don’t know what is going to happen. But we have survived so much. We find joy and laughter wherever we can everyday but it’s not the life I wished for my daughter. No hopes, no dreams, just us.