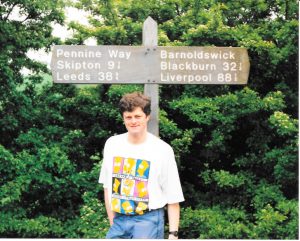 When Smile for ME asked me to write this piece, I didn’t know where to start. I’ve been writing freelance pieces on and off since before I became ill with ME but I’ve never tried to write about myself, apart from a short introduction piece for a work newsletter.

I began by reading the other Share a Story features by ME sufferers and their carers, a few of which were from long-standing social media friends. The harrowing and sometimes heartbreaking stories of other people whose lives have been adversely affected by ME and similar chronic illnesses have led me to consider myself to be quite fortunate.

So many contributors seem to become ill as children or teenagers, while I had already left those years behind. My diagnosis was comparatively fast and probably predated the horrific NICE guideline on CBT and GET, both of which I avoided. Some (most often young women, by the look of things) suffer from multiple chronic illnesses alongside ME, whereas I have only ME.

Before my life was suddenly and permanently changed, it was fairly established and settled. I was in steady employment, had been with my partner for several years and we were buying a house together.

I’d spent most of my working years in public service. A selection of frontline, public-facing roles had led to positions involving such excitement as giving advice to office managers, answering queries and complaints from MPs, solicitors and assorted campaign groups and later, writing staff guidance manuals.

Circumstances led to my final and favourite job. I’d been put in charge of a small team that manually matched sets of information. It’s not always a good idea to make suggestions in public service but I thought that the work could be computerised and so was tasked with teaching myself database programming and writing the software for the job. I had a CSE (an ancestor of GCSE) in Computer Studies, so it shouldn’t be difficult.

The resulting system generated enough extra work to create nine new jobs. I found myself with management responsibility for 13 staff, a computer network and ongoing improvements to the database, alongside the running of the office, which was in Birmingham. My immediate management were in Leeds. The project indirectly saved taxpayers multiple millions of pounds but, sadly, I didn’t see any of it.

I thought nothing of commuting for around three hours each day, including walking four miles to and from railway stations. The pressures of the work needed me to be in the office from 7am, often six or seven days a week.

My evenings were spent I listening to as much new music as I could find, attending several theatre and live music performances each week, looking after a couple of indie bands and writing reviews for a music magazine, along with occasional articles for other publications. Longer breaks involved hill walking, (including the Pennine Way), music festivals, museums, DIY and gardening.

I now recognise that, although it didn’t feel like it at the time, I had a highly stressful job and my other activities were perhaps a little too much to cope with.

The human body seems to have a way of protecting itself, like the time that I passed out after drinking a strong spirit on an empty stomach (I was young) or was violently ill after eating a meal containing cream, which has never agreed with me. I suppose, then, that I shouldn’t have been surprised when the dormant varicella-zoster virus that had been lurking since a childhood bout of chickenpox took advantage of the stress and manifested as shingles.

I was off sick from the office for two weeks, until the painful rash had calmed down. On returning, I discovered the delights of brain fog: I struggled to get back into the work routine, couldn’t remember aspects of my job and had difficulty learning new information. Commuting was a struggle. A few long and sluggish weeks later, on 4 March 1996, I couldn’t muster the energy to get out of bed to go to work. I didn’t go back.

The first few months of my new lifestyle called for a few adjustments. As well as being unable to work (or even travel to an office) I was forced to give up my previous social activities and interests, to the cynical bemusement of some unsympathetic acquaintances.

My symptoms were at the same time bewildering and entertaining. I continually felt like my head was underwater with brain fog, walking felt like it was through a heavy sludge, aversion to sounds was a huge problem for a music fan and light sensitivity caused physical eye pain and severe headaches, leading to the installation of blackout blinds. It’s a nuisance to need dark glasses outdoors but at least I might look more cool and mysterious than was possible before.

Muscle pain and tenderness were difficult to tolerate, as was the often-reported overall exhaustion and weakness, especially a few days after some slight exertion. My favourite symptom, irritable bowel syndrome, was simultaneously uncomfortable and hilarious, with loud squeaks, pops and growls to disturb the ambience of any room.

My doctor was immediately helpful, sending me for more tests than I can remember and signing me off sick for four weeks at a time. Nothing could be identified to be causing my symptoms, so I was advised to rest as much as I could and hopefully it would sort itself out. He admitted that he’d never seen a case like mine but when I suggested ME from my own research, he was keen to find out more about the condition.

Before I saw my usual doctor again, I saw a locum, who had taken the time to read through my medical notes. She told me that I had ME but referred me to a neurologist for confirmation, which was swift. Diagnosis was a huge relief. I might have had an untreatable, lifelong illness but at least it wasn’t anything more sinister. The process had taken 18 months.

The doctors advised me that there was no treatment or cure and nothing that they could do; the only course of (in)action was to rest and not exert myself too much but it was unlikely that I would recover. I wasn’t once told to increase my level of exercise or to push myself through the resulting pain.

Within a week of ME being confirmed, my pension scheme’s doctors decided that I was unlikely to ever be able to work again and I should be medically retired. I became a youngish-aged pensioner.

Life under the weather

I hadn’t imagined a time when I would need to return to bed a couple of hours after waking, sometimes several times during the day – but that is my reality: sleeping with closed curtains/blinds, eye shades and often a cool patch on my forehead to soothe a headache.

All of my traditional friends disappeared during the first few years, with the last visiting in 2001. I haven’t seen any relatives since 2017 and I no longer get phone calls or emails. I’m not especially bothered by this; I usually feel too unwell to see people and like many sufferers, I have new friends online, who better understand what I’m going through.

After 25 years, my ME symptoms remain moderate to severe. I’ve learned to manage my illness to minimise its impact and to plan ahead for any necessary excursions, taking into account the inevitable recovery period. Things are much the same as they were in the beginning. I have the occasional crash but I’ve not had any major setbacks.

I am fortunate in that I am able to walk on a reasonably less-bad day and don’t use a wheelchair, which is just as well as the local streets are cluttered with poorly parked cars and wheelie bins. I limit trips to local shops and appointments, venturing further afield perhaps once or twice a year and paying for it afterwards.

I continue to listen to music when I feel able to and I write for a local volunteer-run newspaper, usually about music and theatre but I also contribute whatever else I can from home. Live music and theatre trips have become rare as there have been too many costly tickets wasted because of feeling too unwell to attend shows.

A few years ago, I managed to get a referral to an ME clinic that had opened a few towns away. There, I was subjected to a short Synacthen test for adrenal function and it was determined that I have less energy on waking than a healthy person has when retiring at night. My diagnosis was confirmed but there was still no effective treatment. The doctor there advised pacing, for the first time, although I had been doing my own version of that since the start.

Despite my daily complaints of headaches, tiredness and everything else, I still have a partner, whose own disability has worsened over the last 20 years or so. We’re still in the house, too, although it’s now a jumble of part-completed projects and doesn’t get cleaned or tidied very often. The garden was re-wilded long before environmental campaigners called for it and is quite overgrown. But nobody visits, so it hardly matters. As I said, I consider myself to be quite fortunate.

Rest as much as possible, everyone.